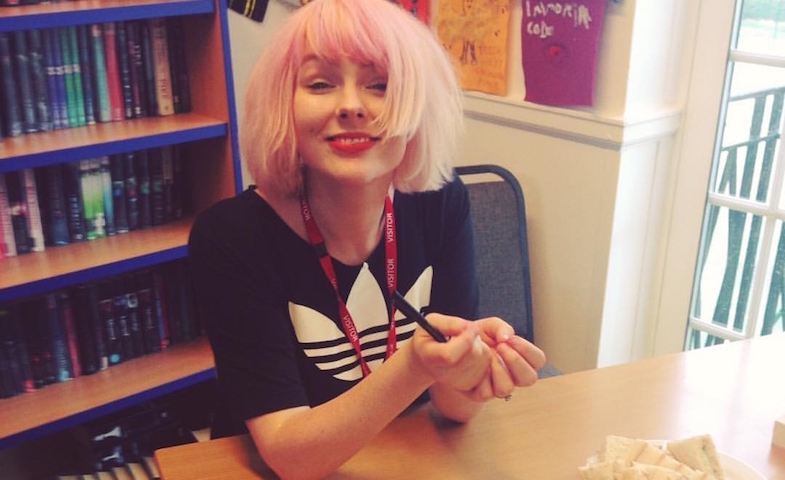 This year’s Glastonbury website poet in residence is the wonderful Jodi Ann Bickley, who fell into poetry in 2009 after winning the Roundhouse Poetry Slam and has since performed her poems all over the country. She went on to start a project called ‘One Million Lovely Letters’ in 2013 where she invited people to email her if they needed a lift and she would write them an uplifting, handwritten letter. She has to date written over 3000, spoken at TEDx and has become a Sunday Times Bestseller with her book ‘One Million Lovely Letters’ which is all about how the project came about and what it has become. She once cuddled Philip Scofield and Stephen Fry called her ‘A Wonderbus’.

We are not made up of fairytales,
My heart doesn’t soar when you enter the room,
I am by no means weak at the knees when I’m with you.
We are not pastel pinks and hearts drawn on steamed up windows,
We are yellows, grey, violet, blacks and blues.
I am not dizzy headed and tongue tied around you.
We are not skipping down streets and stolen kisses around corners,
I don’t expect grand gestures,
We are coffee granules, the council tax bill and ex on the beach.
Shared desk space and still spooning in the midst of a storm,
Worn in shoes side by side and four day silences,
We are kids in our parents clothing, sometimes.
Scrambled eggs and panic attacks,
Red wine, fish finger sandwiches & having each others back.

We are not Pam and Jim, Nick and Jess or Marshall and Lily,
Our fall outs aren’t pretty – no instagram filter will adjust the level of dickhead
either of us can be,
Our lives fill the gaps between the profile pictures & updates,
We are messy, warm, infuriating, safe.
We are part magic & fairy dust,
We are notes in lunchboxes and stubbornness,
Condescending and inconsiderate,
A mass of fairy lights all tangled up,
Willing to spend forever straightening them out.

We are a work in constant progress,
Our heroics wouldn’t sit right in a Katherine Heigl film,
We are newly skilled jugglers of baby, pug & our love –
Plate spinning luke warm dinners & bowls of apple and pear pudding,
Every night hosts to cuddly octopus’s and dollies as dinner guests,
Architects of leaning towers of baby bouncers, bath, chairs & musical mats,
Producers of on the spot lullabies to every Beyoncé song we know,
Code breakers of what each cry means,
Survivors of screams, the worst possible noises,
In awe of what we’ve done, who we are, absolutely exhausted.
But in love.
Always in love.

Everyone is repeating they have no words,
But we’re full of them.
As the camp wakes up to the news,
Tents come alive with profanity,
It can’t be true, can it, really?
It is.
It’s a day none of us have felt less British.
As those around us crack open breakfast wine and shout for revolt.
I think we’re pretty safe in the knowledge that it’s nobody’s here fault.
So let’s trudge on through the mud,
And sing out loud our protest songs.
As the country is divided – in this field we belong,
Embrace your fellow Glastonberry,
As they are feeling just like you,
Goodbye old friend,
We’ll miss you a lot,
Our little mate the EU.

We are in,
call us dreamers, wallflowers, anything.
we are headliners and 3am toilet queuers,
magicians and end of exam celebrators,
first time performers and festival veterens,
jugglers and toddlers on shoulders,
comedians and nine to fivers,
cabaret queens and romantic breakers,
dancers until dawn and early nighters,
cello players and jeremy corbyn,
dance DJs and rabbit hole fallen,
sunrise returners and toasty eaters,
no boundaries between us,
hand in hand with old friends,
whilst embracing the new.
together, allies, family, kin.
In.

It’s 10.30, the camp has been awake for hours as we start stirring.
Haven’t sleep in like this for eight months now, tiny babies just don’t seem to allow it.
Lay awake, basking in the not yet dirty/muddy/oh my gosh we slept in until 10.30 feeling, when we hear:
“Whoever she is, she needs to be into military history and small packages”.
We listen in, much because these guys sound like they could be on Made In Chelsea and half of me wants to see them in case it wrecks the illusion, but we step out.
They’re talking about Rob.
Rob is their housemate.
Rob likes quizzes,
I’m not sure how good he is but his friends seem to think he’s a bit of a quizzical genius.
That’s where the compliments stop, as they tell us about an intimate mole he’s got and how he doesn’t really get out a lot, only to walk around Chelsea in a blazer he loves.
His standards are high, he rates girls out of 10 and would never go near a five, six or even seven. Actually, Rob will only ever go for eights or higher. Rob is looking for someone to love him.
But in my honest opinion,
If I had to say something super true – from what we’ve heard about Rob,
I wouldn’t give him more than a 2.