25 Years of the Green Futures Fields 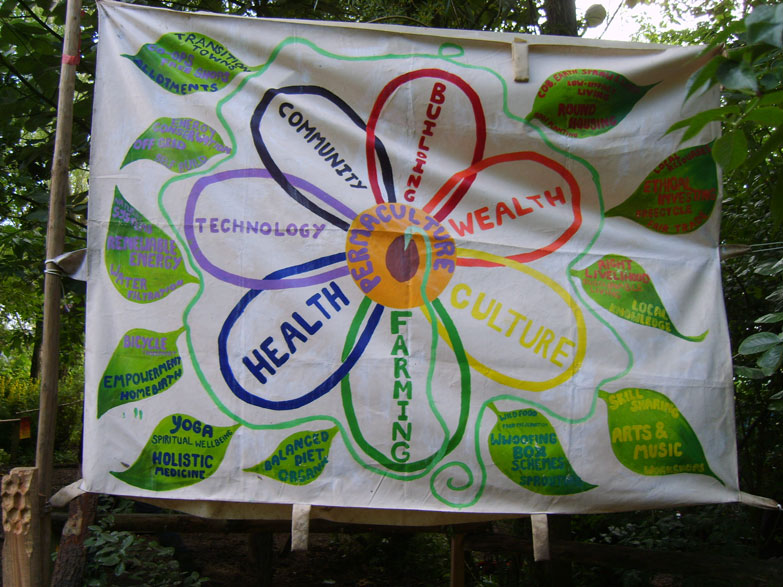 1989 was a pivotal year at the at Glastonbury Festival. Fresh from the Kingston Green Fair in a borrowed Playbus from Merton Council, it was the year that the concept of a green future in a festival was launched by Kim McGavin and David Taylor with a crescent of small marquees. This was also the year that Team Greenfield emerged, with Anne Waterhouse and Liz Eliot at the Helm.

1990 saw the field shared with the new Green Party who had been given the job of organising the litter collection for the whole festival. The Green Police were there too. A zany force set to encourage the campers to take responsibility for their waste using humour and examples as their weapon.

The naughty nineties were years of experimentation and experiment with weird and wonderful structures, and peculiar groups of people doing the oddest of social experiments jostling for position on an unsuspecting festival crowd. Most were failures but gradually the ideas began to work.

The decision to go generator-free on the field was a big step forward. Just to encourage wind, solar and pedal is something still with us today. This concept was followed by a myriad of green events and became part of the counter culture. Dale Vince from his new business, Ecotricity, was on the field for a couple of years running Windphones, providing a valuable function of charging our new mobile phones using wind energy. In 95 we provided the first ever (solar powered) internet cafe at a festival with Pilton’s first ISDN line running all the way into the centre of the field.

Politics and campaigns are not ignored – sometimes giving a voice to social issues that no mainstream media were interested in. Not to forget The Criminal justice Bill of 1994, where Jean Vidler and Raga Woods – with the help of the twirling and snaking rainbow banner – led a peaceful march down to the main stage.

Permaculture was a new concept developing in the UK (originally from Australia). We remember an interesting conversation with Michael Eavis when we asked for a permanent permaculture area on the field. Imagine our surprise when he not only agreed but offered to dig a pond to start it off. 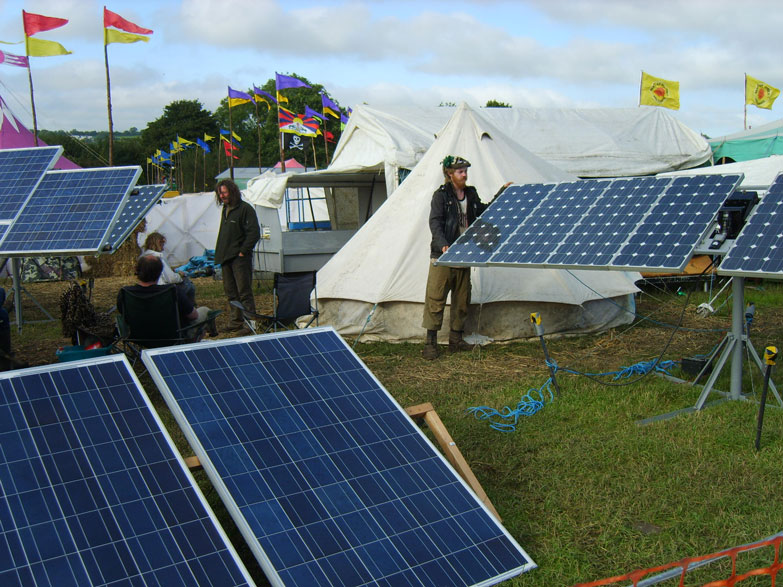 In the mid nineties, our small venues began to emerge. The Mandala is a pedal-powered venue inspired by a dear friend, ex-Sex Pistols producer and musician, Dave Goodman. Dave loved the concept of homemade energy and brought together a mixed concoction of musicians from his Music label Mandala, including the Spacegoats and Japanese artists, The Wind Travelling Band, who incidentally brought 1000 Windbells. It was Hiroki Okano who in 2000 brought some tiny embers of the flame taken from the tragedy of Hiroshmina in 1945 to the Green Futures Field. I remember the erie experience of sitting next to the Peace Flame in the office caravan. For safe keeping. Quite a responsibility! It’s still to be found in 2015, in the Peace Dome in the Sacred Space.

It was the principles of the Green Futures Field that inspired the ‘Big Green Gathering’ – a national Green educational and lifestyle event which ran in Wiltshire and Somerset from from 1994 to 2007.

More features and concepts came and went. From the Gaiasphere – an FM interconnected Yurt venue – to the Low Impact Zone where you could find giant willow dragons from Azel Engineering, log cabins and a full size beach.

Gradually our regular participants began to find their feet on the field. Small World Solar Stage continue to run events in their own right; starting with the Tadpole, which later morphed into the ever-popular Toad Hall. The Groovy Movie Picture house was the world’s first solar powered cinema.

This is too short a piece to mention and thank everybody that has helped and contributed not only to a rather interesting festival field but to some a whole way of thinking and living. So here’s to the first 25 years and may we all have the power to shape the future in a green and positive way in decades to follow.

Sam Hermitage and Jean Vidler,  May 2015